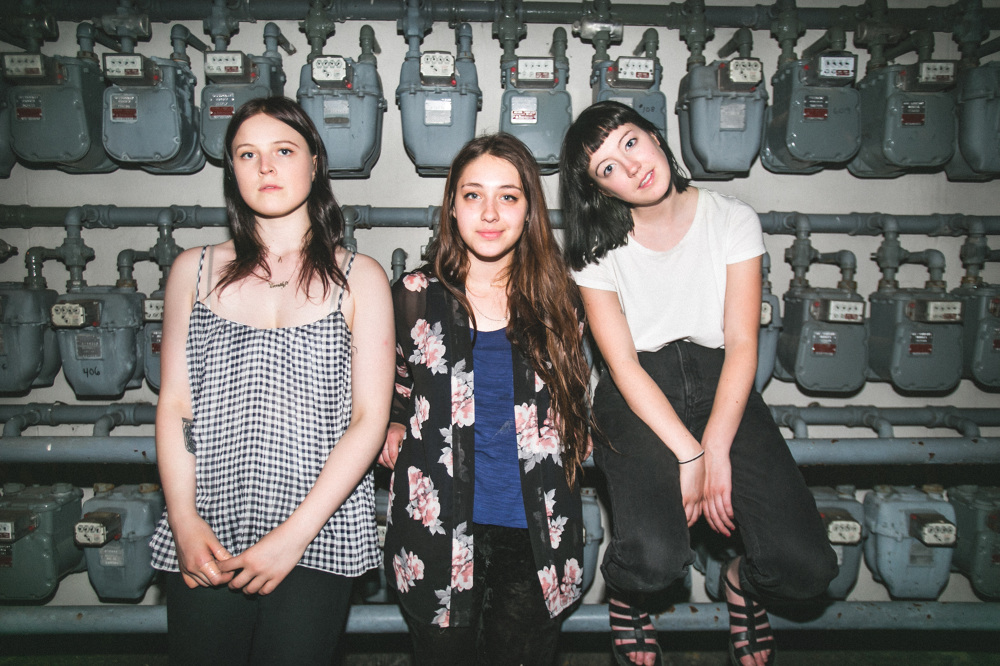 Daddy Issues has mastered the art of keeping it real. The band was originally conceived as a parody Twitter account by three close friends — Jenna Moynihan, Jenna Mitchell, and Emily Maxwell — who decided to turn their 140-character wit into three-minute pop songs. Thus, Daddy Issues was born. Their music lies somewhere between witchy grunge and surf glam– kind of like what the girls from The Craft would sound like if they had opted to start a band instead of Invoking The Spirit. Their lyrics center on a young every-woman who celebrates small acts of rebellion while crushing on boys with blue hair.  This is the first interview in Japan!
【→Japanese】

＊We’d like to ask the various members of the band to introduce themselves. Please tell me about what caused you to start in music. 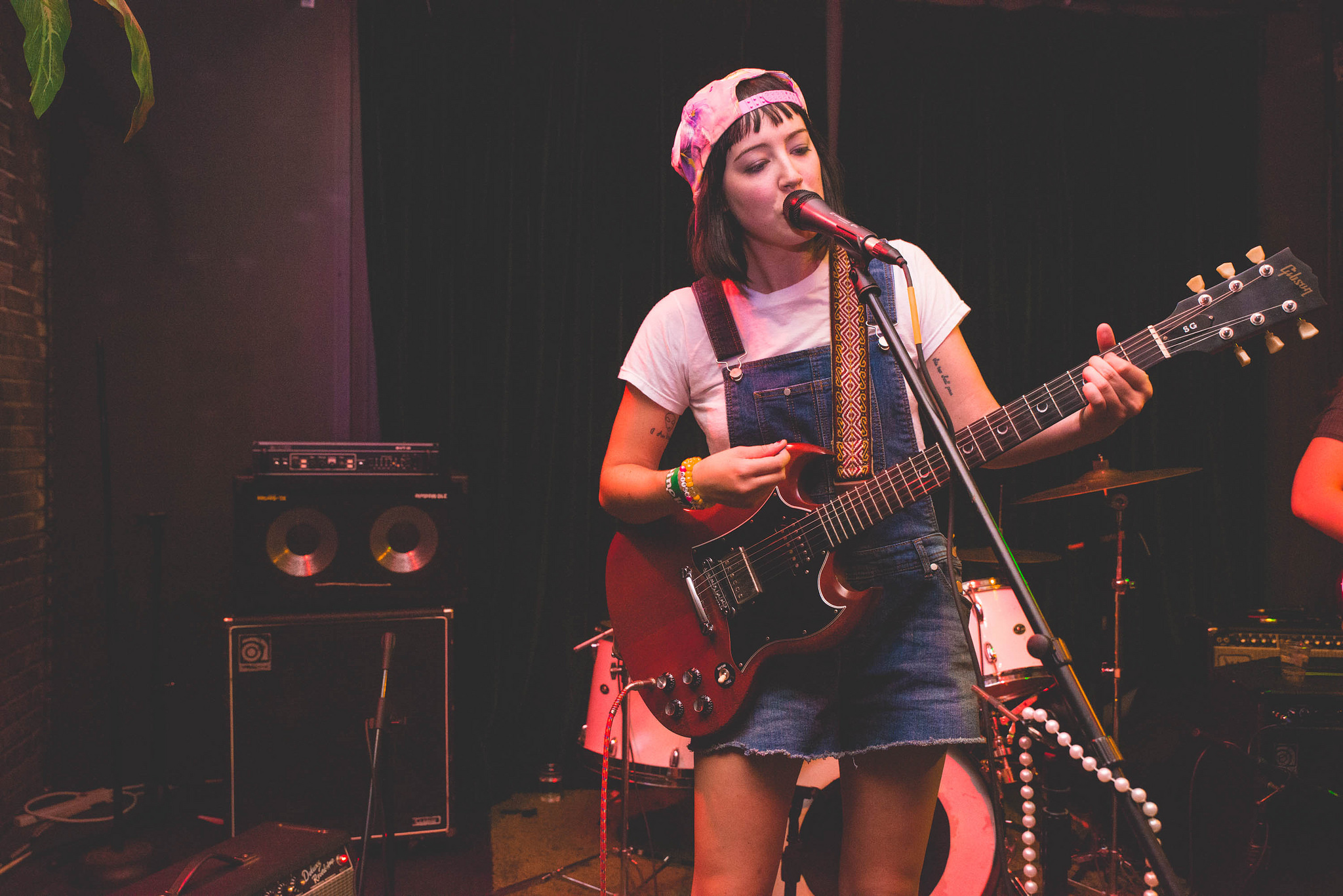 Jenna Moynihan(G&Vo)：
I started playing a little bit of guitar in high school, but I didn’t take it too seriously until we started the band. I have a lot of family members who play music so I was surrounded by it growing up, most of it country influenced. I started listening to more rock, punk, and feminist punk as I got older. Now I enjoy playing in Daddy Issues and also a shoegaze band on the side. I’m influenced by a lot of late 80s and 90s punk and grunge artists. 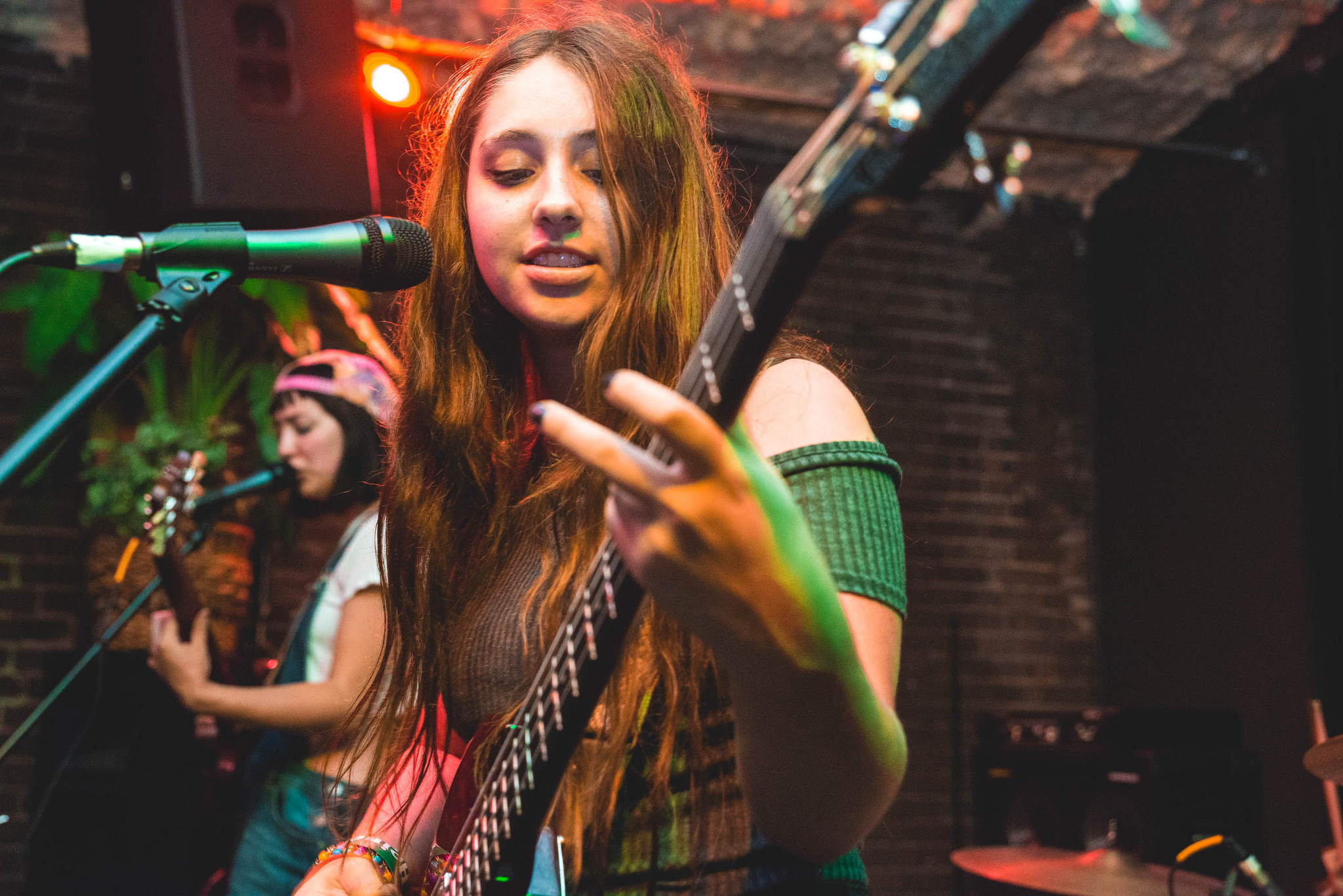 Jenna Mitchell(B)：
I played violin from age 6 – age 14, so I had a little bit of a background in music to start off with. From there, I picked up the guitar for a few months and then switched to the bass, which I played for a few months and then put down again. I later figured I’d bring it to college just to have around but it ended up being useful, apparently! When I started playing the bass in college I was listening to a lot of New Order, Kings of Leon, and Muse so I’m very influenced by music with melodic bass lines and bass-forward music. I’m really, truly, all about that bass. 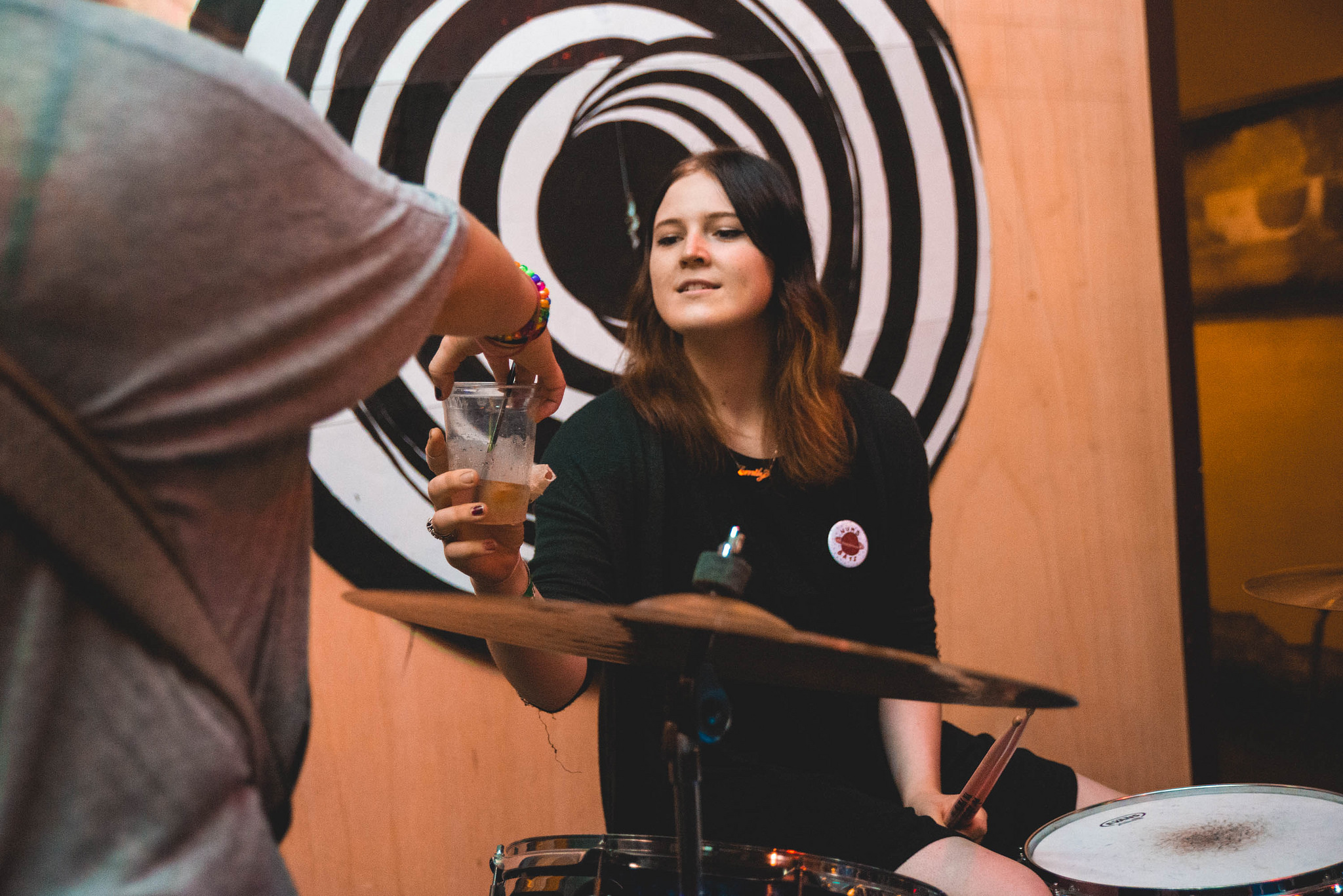 Emily Maxwell(Dr)：
I had never really played an instrument before we started Daddy Issues, but I’ve always been a huge music fan. I got a bachelor’s degree in music journalism and work at a music magazine but never anticipated being a musician myself. I had taken a few drum lessons as a child but stopped after few weeks and never picked it back up. I’m largely influenced by the Smiths, The Stone Roses, Jesus and Mary Chain, Joy Division and a lot of 80s music and emo and punk bands.

＊What circumstances led to you forming the band?

Daddy Issues(Jenna, Jenna, Emily)：
Jenna and Jenna were roommates and started writing music when they were bored after Christmas break. They wrote “Pizza Girl” and were playing it at a friend’s house and asked Emily to sit in on the drums. She didn’t play drums – Jenna Moynihan had played guitar for a while, but no one else really knew their instrument – but they played through the song and decided to start the band. 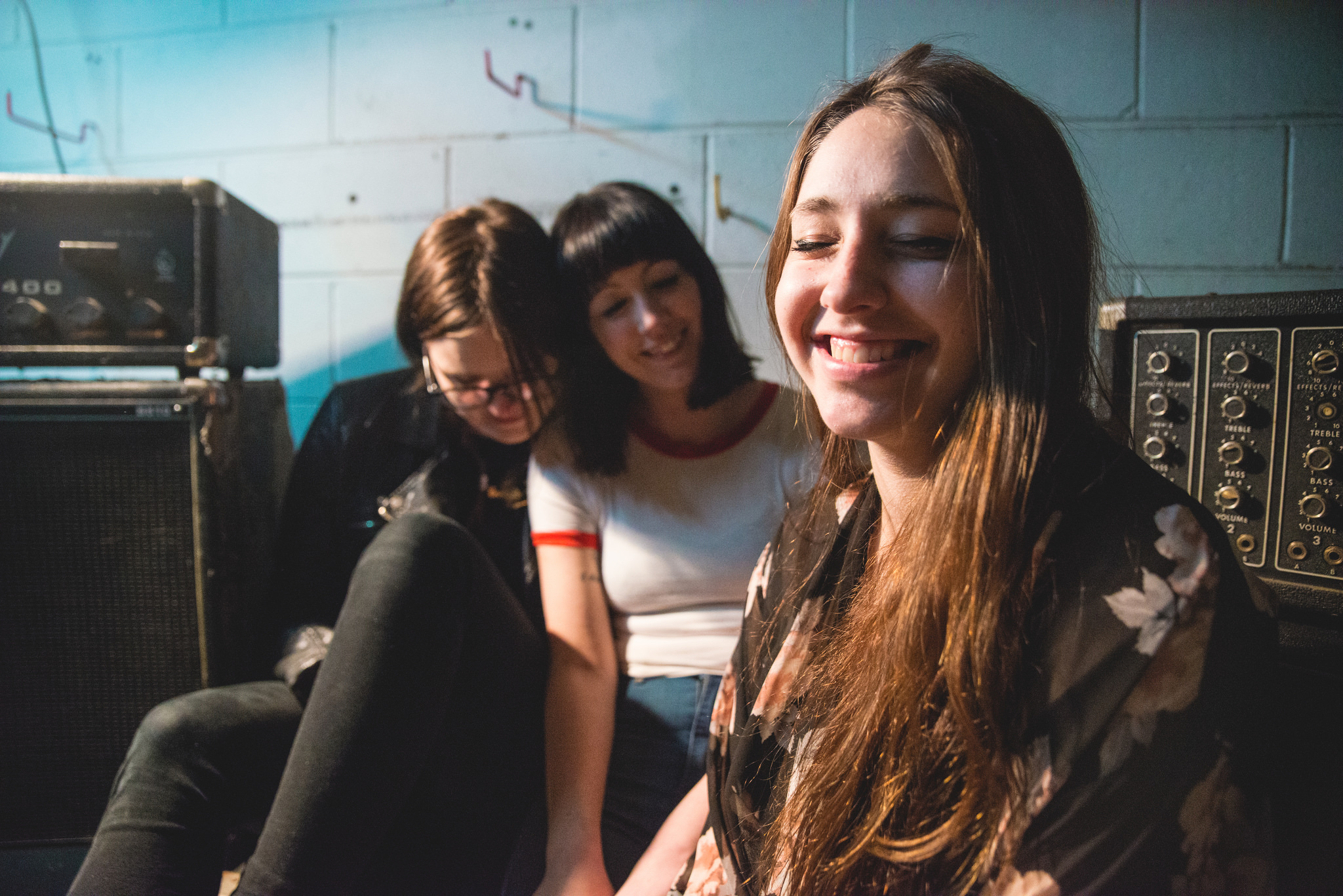 ＊What is the origin of the band’s name?

Jenna Moynihan saw the name written on a bathroom wall at an old DIY venue in Nashville. She thought it was probably a really cool punk band, but when she got home and looked it up on the internet she realized it didn’t exist.

＊What kind of method or process do you use to create Daddy Issues’ songs.

Usually Jenna Moynihan comes up with a chord sequence for a song or general lyrical idea and brings it to Emily and they sit down and write the lyrics out together. Then, once it’s finished, they take it to Jenna Mitchell and flesh it out as a band. 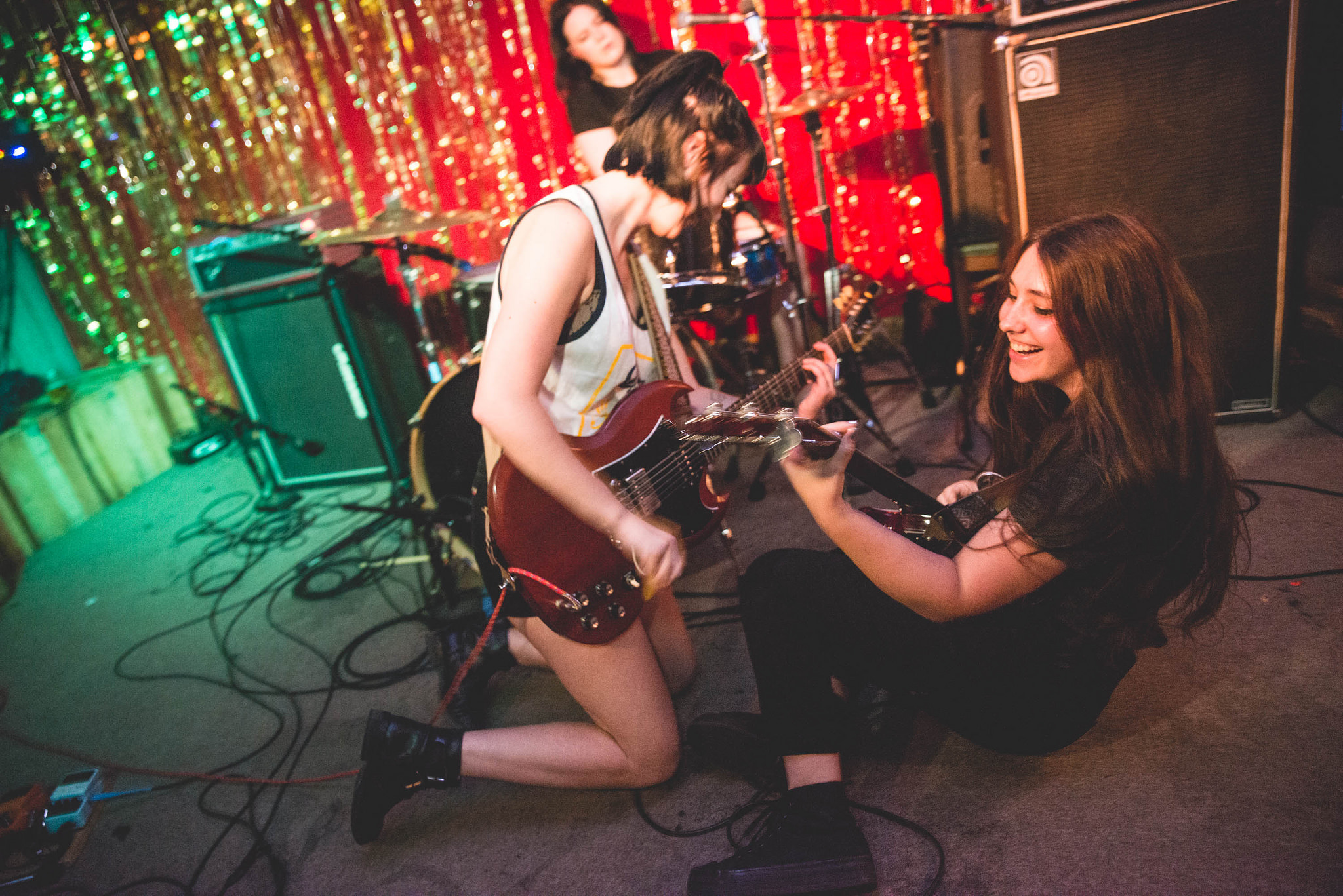 ＊Regarding “Drop Out” and “Can We Still Hang”, Please give us some anecdotes regarding various of the songs.

“Drop Out” was written when Jenna Moynihan was thinking about dropping out of college (which she eventually did). “Out to Lunch” is about being a girl and feeling crazy, “The Bruise” is about going on a bender after the end of a relationship, “Shitty World” is about loving someone who doesn’t have room for you in their life.

＊Please let me know about “Pizza Girl”(Is this your first song?)

This was our very first song! It was sort of a joke, but it’s a love song about your best friend.

＊Please tell me about the ‘Indie-scene’ of Nashville?

There’s a great indie scene in Nashville. Our US label, Infinity Cat Recordings, has some of the best bands in Nashville on its roster, like Jeff the Brotherhood, Diarrhea Planet and Music Band. There are also a lot of other talented rock bands and artists in Nashville, like Bully, Big Surr, Western Medication, Reality Something and Jessica Lea Mayfield, just to name a few! 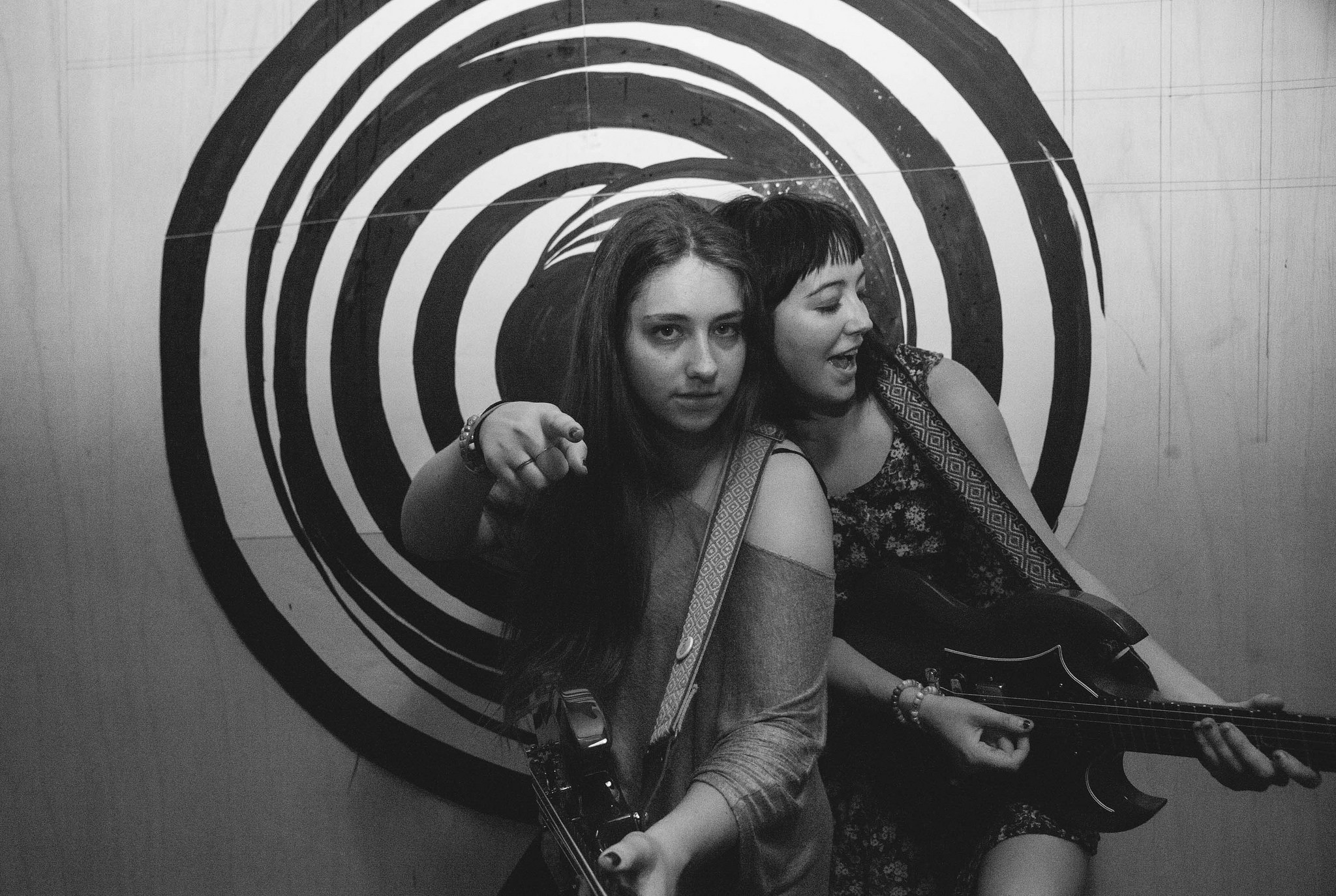 Jenna Mitchell has been listening to a lot of Americana music by artists like Rayland Baxter, Robert Ellis, Margo Price, and Dawes. Jenna Moynihan has been busy working on songs with her new band, Slowtalker. Emily Maxwell has been doing a lot of knitting and listening to Arthur Russell, Turnstile, Pinegrove and Santigold.

＊Is there any message you want to send to your fans in Japan?

Hello! We hope you enjoy our music. Thanks for listening!
We’d love to get to know you. 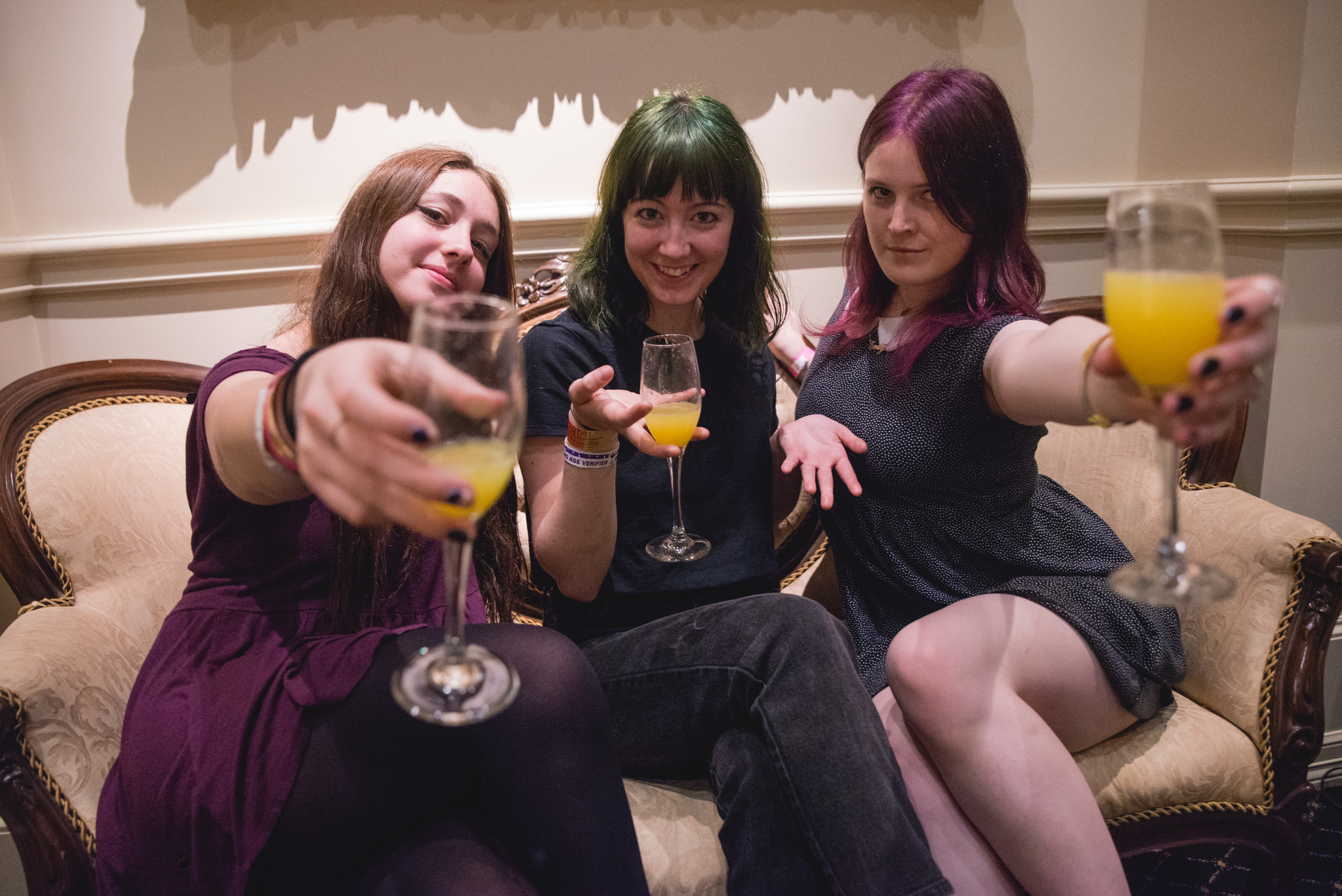 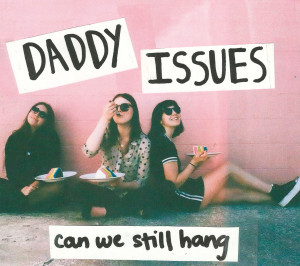 Can We Still Hang
by Daddy Issues